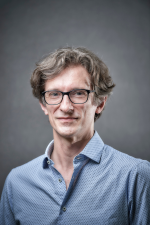 Siegfried Hapfelmeier’s research group studies pathogenic as well as symbiotic bacteria-host interactions in the mammalian intestine. In a variety of research projects intestinal bacteria are modified through genetic and biochemical engineering to serve as research tools and experimental vaccines. Siegfried is a general microbiologist by training. He studied Biology at the LMU Munich, Germany, before moving to Switzerland to complete his PhD thesis at the ETH Zurich (Institute of Microbiology). In the laboratory of Wolf-Dietrich Hardt he established and characterized antibiotic pre-treated mice as a model for enteric non-typhoidal invasive Salmonella infection – now a recognized standard in the field – and elucidated the roles of dendritic cells and bacterial type 3 secretion systems in Salmonella-induced mucosal pathogenesis. During his postdoc in the lab of Andrew Macpherson (McMaster University, Hamilton Ontario, Canada) he developed intestinal symbiotic Escherichia coli strains carrying auxotrophic mutations that prevent them from surviving autonomously in the intestine. This permits the transient colonization of germ-free animals with these microbes and provided a powerful tool for probing intestinal mucosal immunity and other host microbial interactions. Soon after joining the IFIK as young research group leader, he was awarded with an ERC Starting Grant to extend the same principle to intestinal pathogens. This work, among other findings, revealed fundamental design principles for effective and safe live mucosal vaccines. Other research topics investigated in Siegfried Hapfelmeier’s lab include the role of the microbiota on the health effects of common environmental toxins in the food chain and the regulation of host disease resistance and metabolism by bile acid transforming gut bacteria. Siegfried Hapfelmeier lives with his wife and two children in Wabern near Bern.